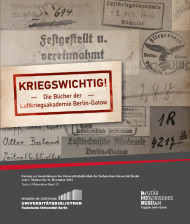 “In November 1945, the British occupation authority handed over to the library of the Technische Hochschule Berlin, now the Technische Universität Berlin, approximately 10,000 books and magazines which were stored on the premises of the former Luftwaffe schools in Berlin-Gatow. As stocks ,Luftkriegsakademie Berlin-Gatow’ they were incorporated in the TU library.

In 2011 the examination of samples showed that this inventory includes goods looted during the Nazi era, notably war booty from the Second World War. In a project funded by the Arbeitsstelle für Provenienzforschung (since January 2015 Stiftung Deutsches Zentrum Kulturgutverluste) and supported by the University Library of the TU provenance researchers since 2012 identified those books, journal volumes and folders taken over seventy years ago. On the basis of external characteristics, such as stamps, annotations and bindings, and with the aid of historical sources, they tried to unravel their historical origin and determine whether it is Nazi loot.

The exhibition “”OF MILITARY IMPORTANCE! The books of the Luftkriegsakademie Berlin-Gatow””, which is shown at the University Library of the Technische Universität Berlin from 01.10.-14.11.2015 takes a look at the institutions by which the books and magazines were collected before the end of World War II, such as the academies of the Luftwaffe in Berlin-Gatow and their library and the Deutsche Akademie für Luftfahrtforschung, which presumedly stored their book collections or part of them in Gatow. It also deals with the Technische Hochschule Berlin, tells of the loss of its book stocks due to the Second World War and the attempts of its library to acquire scientific and technical literature before and after the end of the war, to build up the necessary research and study book stocks again.

Details of the books themselves are shown, the character of the partial inventory ‘Luftkriegsakademie Berlin-Gatow’ as well as the looted good contained therein. The literature identified as looted good stems from Belgium, France, Poland and Ukraine.

This publication is the catalog of the exhibition.” 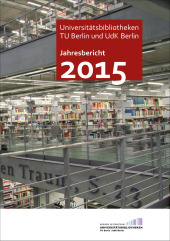 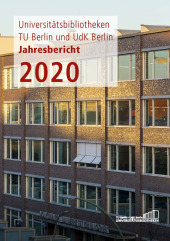 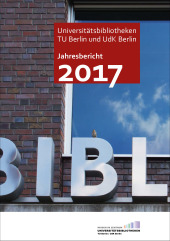 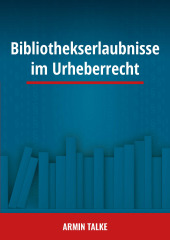