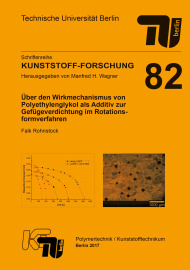 A major problem in rotomolding are bubbles of entrapped air, which not only reduce the mechanical strength and extend the processing time, but also affect the aesthetic appeal of the shapes produced. Surprisingly, Kulikov and colleagues (2009) demonstrated that a small amount of polyethylene glycol (PEG) added to the polymer accelerates the sintering and drastically reduces the number of air bubbles. The objective of the current work is to explain why PEG is so effective in the sintering process, and to explore the resulting improvements of the mechanical properties. Rheological measurements show a slight reduction of the viscosity at low tempera-tures due to the addition of PEG. However, the viscosity decrease is not sufficient to enhance the sintering process. On the other hand, two-particles sintering experiments, which can be described excellently with the Bellehumeur model, show an increased heat transfer by adding PEG. Sinter experiments using powder beds of LLDPE particles with PEG added demon-strate that the effect of the PEG occurs immediately after the melting of LLDPE. PEG melts at lower temperatures than LLDPE and wets the LLDPE particles. As a result, air is forced out of the powder bed and the fraction of entrapped gas, which is enclosed by the polymer melt, is smaller. The solubility of gases and correspondingly the saturation concentration of air in the polymer melt increases with increasing temperature. As a result of the lower gas fraction entrapped in bubbles, the gas concentration absorbed by the polymer melt is below saturation, and the air in the remaining bubbles diffuses faster into the melt. Measurements of the time dependence of bubble diameters in the melt were performed, and by use of the Gogos model it could be shown that the degree of gas saturation of the polymer melt is the driving force in the bubble diffusion process during the sintering process, and determines the life time of enclosed gas bubbles. This is also confirmed by sintering experiments with un-saturated LLDPE melts, which were carried out under partial vacuum and lead to shapes without any air bubbles. According, there are two possibilities for increasing the efficiency of the rotomolding process, either by adding PEG or by the application of a partial vacuum during sintering. Even small concentrations of PEG show a significant improvement of the mechanical properties in the sintering process. The impact strength can be increased by 33 %, the tensile modulus by 23 %, the yield stress by 5 % and the elongation to fracture by 83 %. Depending on the shape produced, the productivity of the rotomolding process can be increased by up to 20–30 %, or up to 30–40 % of heating energy can be saved. The application of a partial vacuum of 700 mbar also leads to a significant increase in the mechanical properties. For example, the impact strength could be increased by 15%, the tensile modulus by 7 %, the yield stress by 9 % and the elongation to fracture by 71 %. 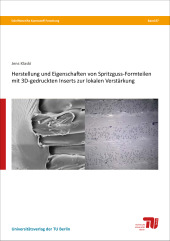 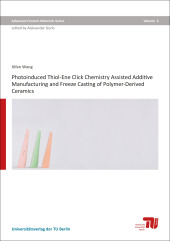 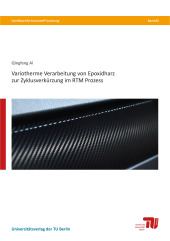 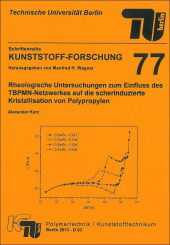